What Happened To El Nino For Southern California? The Answer Is Here; Video Included 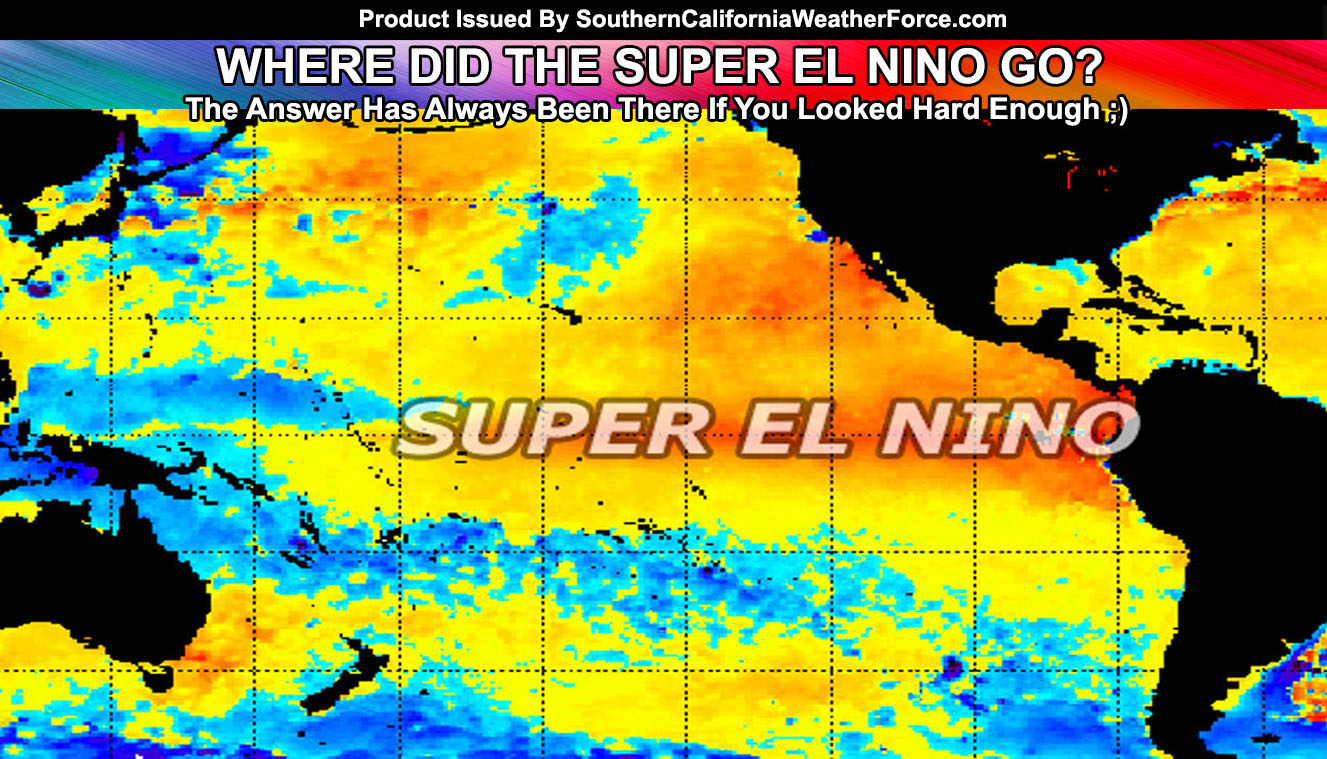 Everywhere you look (No not Fuller House) you see articles questioning where El Nino is and why the little boy didn’t show up.  The answer my surprise you and even open your eyes.  After you are done reading this article and watching the video embedded you’ll see why you need to keep tuned to the forecasts I provide you, both the free and the business commercial sections of the website and this page.  Read on …

Where did El Nino go?  Nowhere … it’s HERE … The Eastern USA is warmer than average this winter, Chicago has less snow, and severe storms are hitting the Southeast and Eastern seaboard.  That right there is EL NINO and El Nino is in full force across the Eastern half of the country.   So to say El Nino did not show is absurd … it did and if you were in the states out east you would hear nothing but El Nino predictions were correct out there.

With so-called professionals in the weather forecasting field predicting a massive El Nino with rainfall through Southern California in the peak of El Nino, usually December, January, and February, it just never really showed up.  Sure, we had a couple very strong systems in January and off and on systems in December with one small system in February .. .but it hasn’t really shown as a true El Nino pattern in Southern California.

The person I will put on blast is this Bill Patzert guy from JPL/NASA.  Quiet honestly one of the worst forecasters in climate and he calls himself of climatologist?  What he does is unless it is an El Nino (happens two times a decade on average) he goes drier than normal.  Two times out of every 10 years Patzert goes above average for precipitation with below average in Northern California with the ‘typical’ El Nino pattern.   According to Patzert, by now we should be flooding everywhere and using boats to travel down our neighborhoods.  What?  Yes he did say that and I sure hope the guy watches what he says from now on because no one should believe a word from his mouth.  Back in 2004-2005 he went drier than normal … me above normal.  We had one of our strongest rainy seasons in many years.

Now, we’ll put him off blast right now and go into what we are going to expect.  If you are new or existing you should know that my forecast called for above average in California with Northern California seeing MORE rain than us, which isn’t a typical El Nino pattern.  So why is the West Coast not seeing the typical pattern and how did I forecast February to have ridging and above average temperatures when others said opposite back in Fall?

Pretty simple, the Martin El Nino Anomoly is why.  We have never seen such a strong El Nino signature in recorded history and there is always a balance in life to everything.  Too much can change what the ‘normal’ would be in moderate amounts.   I cautioned the viewers this and it was 100% correct so far.  A surface ridge west of here formed due to the higher El Nino values and warmer waters west of here and deflected the storms into Northern California and the Pacific Northwest.

El Nino is still above a 2.5c and now what we’re going with is thinking through March a strong El Nino signal would act as a strong La Nina signal.  Most of you think that La Nina means dry weather but that is not the case in Spring and Fall.   La Nina is dry in the winter pattern, but rainy in  the Fall/Spring patterns as the pattern becomes erratic out of and into the Summer calm pattern.   March 2016 is still on track in my long range models to be above average so yes storms ARE COMING and you need to count on it and trust what I say.  If you are caught with your pants down in the roofing business then don’t complain to me that you didn’t have time .. It is coming after the first week of March and likely into April as well.

Because of the higher sun angle and strong March and April storms we likely will have an increased probability of severe weather containing tornadoes, severe winds, flooding, hail, and blizzard conditions above 6,000 Feet.

Want to go further through the year as a sneak peek?  Very possible that the neutral or La Nina conditions developing would bring a stronger monsoon season to the Southwestern USA but temperatures will be he highest in June and July.  By September, October and November the Fall pattern would be stormier than usual, opposite of what we saw last year.

So next time you see an article somewhere asking why forecasters got El Nino wrong … once March and April are over why don’t you go ahead and show them this article and get them to follow the only person to trust in weather … We can’t have these so-called ‘experts’ ruin what I’m building … which is trust from the people in weather forecasts again.