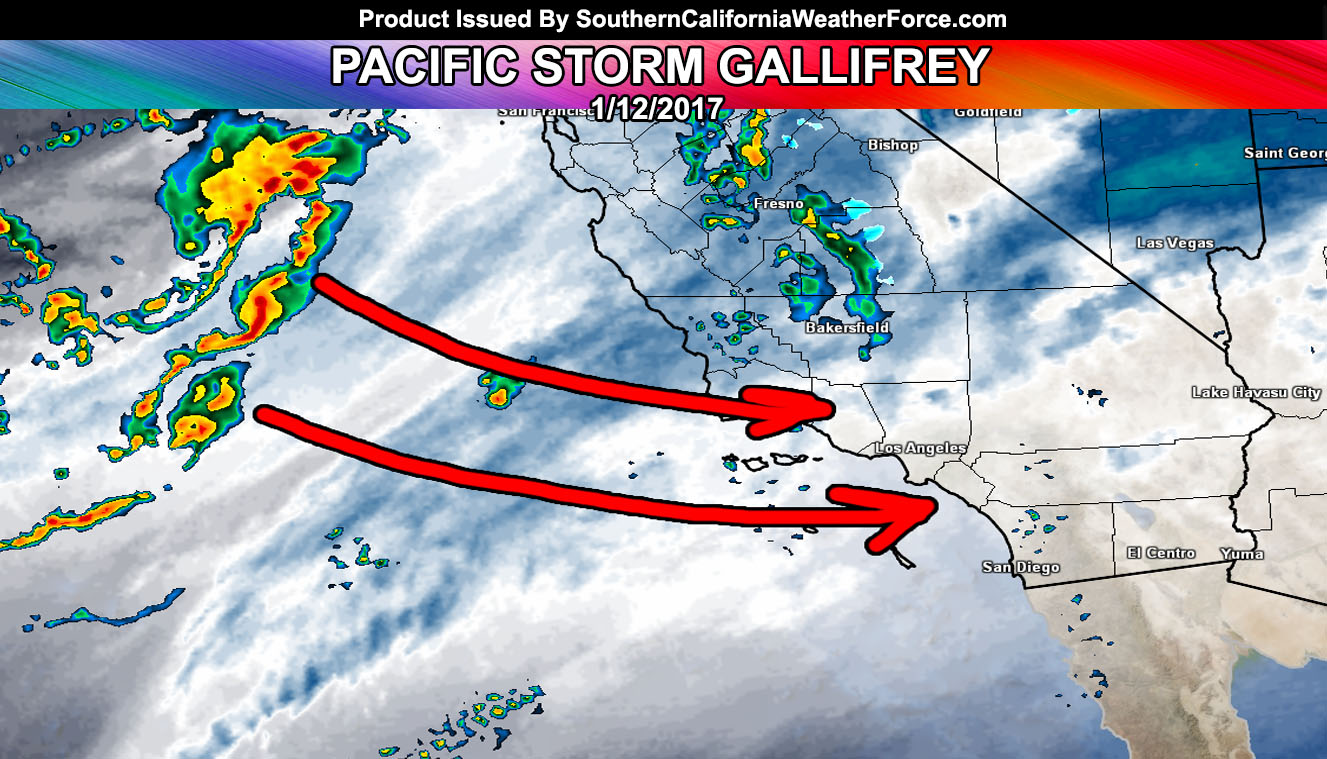 Well it’s what Whovians have been waiting for .. .The ‘G’ system … Gallifrey.  Although he won’t be over a category three like a four, five, or six … it’ll still bring some more rainfall and low elevation mountain snowfall to the region.  Read on for details.

Gallifrey will reach the Southern California coast by sunrise around Vandenberg Air Force Base and SLO County, however out ahead of the system will be scattered convective cells in the LA/VT/IE/OC/SD areas so do believe upslope activity will be hitting then well ahead of the main front.

The main front of Gallifrey will hit Ventura County early Thursday morning and Los Angeles after 9am, OC 10am, and the IE and San Diego shortly after that.  Heavy rain is expected in all areas of VT/LA/OC/IE/SD with the heaviest in a line across OC/LA/IE surrounding Chino.
LEAST RAIN:   Metro areas ?   San Luis Obispo had the most with previous system but this one will give less rain than even Los Angeles …Storm is very minimal for Kern County
Snow levels look to be in the 6,000 FT range for most of the storm so resorts will see a good dumping from this frontal zone on Thursday. 6-12″ of snow for Big Bear, 4-6″ for Wrightwood, Dusting for Tehachapi and PMC, and maybe a lot more in the 6-12″ range for Idyllwild with a dusting in Anza.
Snow levels crash to pass level by the evening/night hours and ‘any’ activity left over could very well fall on the passes … don’t anticipate a full closure though like with previous systems so if you have to go through the passes then you’ll make it through safely.
Nominal mountain/desert winds will accompany the system …
Thunderstorms are being monitored for the metro areas (south/west of the mountains) for Thursday and any additional products will be issued accordingly.

Everyone else is going to have to click the link and go to your micro-climate section and await the alerts that come.  Some are out now … and others will be issued.
Click Here To Go To Your Micro-Climate Section –

See ALL the alerts I issue here – https://www.southerncaliforniaweatherforce.com/