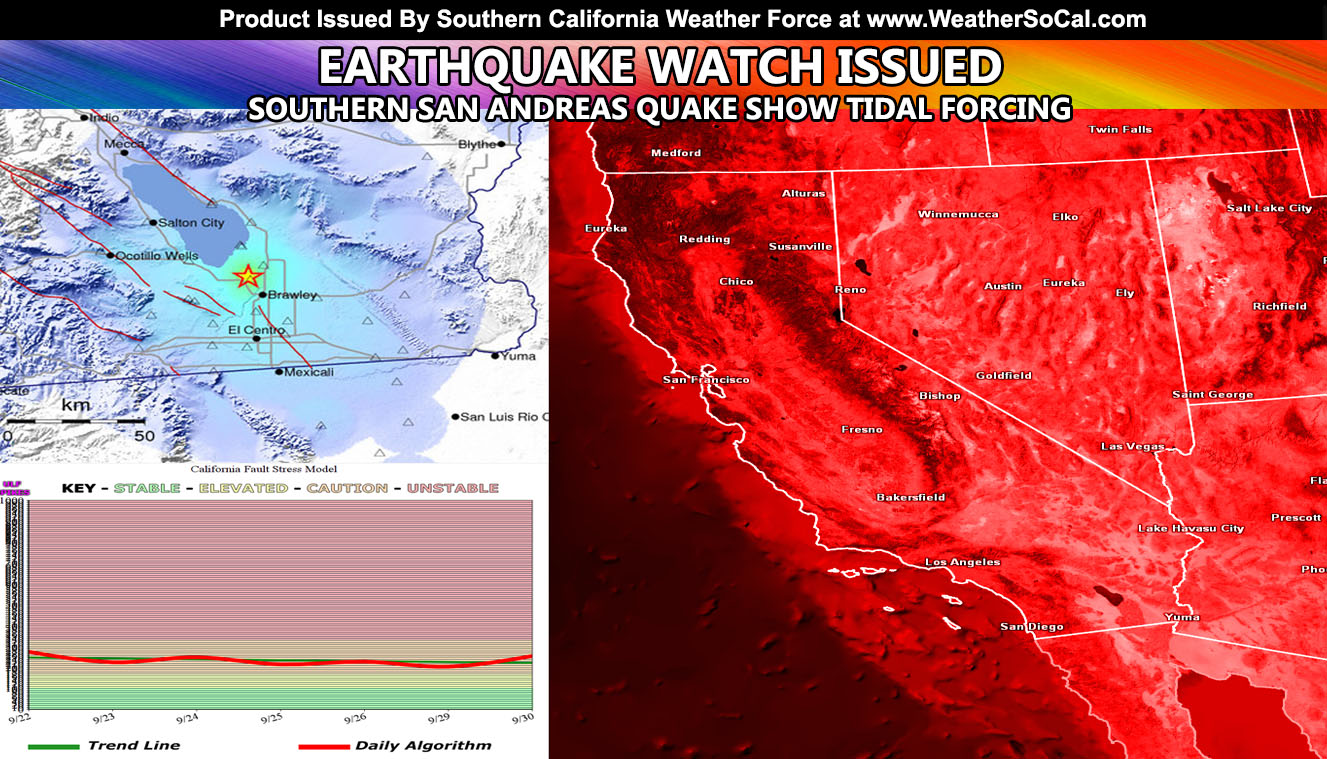 Southern California Weather Force has issued an Earthquake Watch spanning all of California, Nevada, and Northern Baja Mexico as a 4.4 magnitude quake hit the Southern San Andreas with numerous aftershock slips this evening (Wednesday).  This coincides with the forecast from Project Destini and Caifornia Fault Stress model of 3s and 4s and MAYBE a 5.  We will now see a larger one in the short term so read on for details what the image means …

First before you read the upper left image is the quake that proves what I said below… the lower left is the California Fault Stress Model showing a ‘breathing effect’, and the right is the official Earthquake Watch area.

VIDEO: ALSO come back up here and CLICK HERE for the video made a year ago on how we are going to have a big one soon and the science behind it

Ok now we got the links out of the way lets get on with it.  Project DESTINI said high stress levels on the plate.  California Fault Stress model NOTED a ‘breathing effect’ where daily the ULF waves go up and down as if the area was breathing.  The last forecast indicated a 3s and 4s and MAYBE a 5.  We just popped close to a 4.5 on the Southern San Andreas so that takes care of that.  What is concerning to me is what is called Tidal Flexing.  Tidal Flexing is when the Earth is between the Sun and the Moon and the Moon pulls on us stronger and this makes the crust go up and down, eventually giving way to a larger quake in the world.  My good friend the late Jim Berkland worked with me on this with his SYZYGY theories.  We worked side by side online when I was younger and we became a good team until his untimely death.

So what we have here is tidal flexing, geomagnetic storm, and a breathing effect.  This all points to a larger event happening in the near term.  I cannot tell you where.  The Hayward Fault has been acting up as well up in San Francisco.  But I will say right now … We are under a major amount of stress and if you think of this analogy.  A fault is like you holding onto a ledge.  If one finger slips then you did not fall.  If another slips then you still did not fall.  Those are called ‘foreshocks’.  You eventually will slip and that is the mainshock earthquake.  That is the best I can explain what is happening in the region.

So with that being said… Southern California Weather Force has officially issued the Earthquake Watch effect now for the near-term in response to tidal flexing in the region.  I cannot say when, but it will happen in the near term so make sure you are ready at all times.  Many of you are not… and like I said previously… We are NOW OUT OF THE QUAKE DROUGHT … Want to read that?  Click here