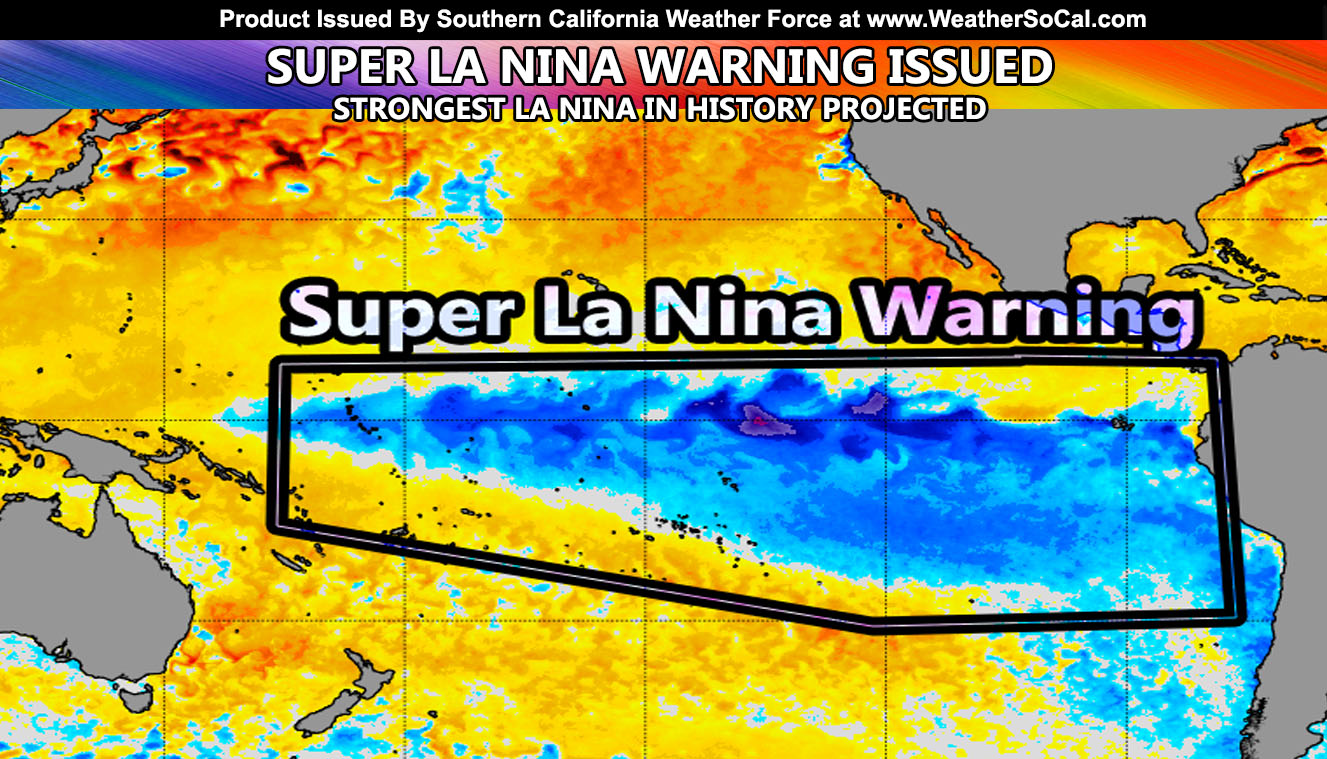 Southern California Weather Force has upgraded for the first time in office history from La Nina Warning to Super La Nina Warning.  As projected in my May forecast, I stated that this year’s La Nina would be a strong one.  Recent numbers of mine now indicate this to be true and over, with a projection value of the strongest La Nina to ever develop in the Equatorial Pacific Ocean in recorded history, coming just five years from the strongest El Nino values in history.  The waters down there will be the coldest in anomaly we have ever recorded and this will put an interesting twist on our season forecast.  Read on for details …

In the first paragraph I do not put link in it because the introduction paragraph goes on the main Facebook Page.  The link to the May article can be viewed by Clicking Here.  The quote from five months ago stated, “First and foremost, the Equatorial Pacific Ocean is showing signs of La Nina right now with the latest sea surface temperatures coming in. Other agencies expect this to be a hiccup and that we will likely see a neutral season coming up, which is neither La Nina or El Nino. However, trends on my calculations are certainly showing up as much stronger of a La Nina signal and this will happen as early as this Summer as cold water up-welling occurs west of South America with a weakening of the trade winds.”

This is exactly what we are seeing right now.  If you clicked that article link from May, the article image was the La Nina Watch.  Look how it is from water temperatures compared to the article in-which you are reading right now.  The amount of coverage and depth of the cold water is unprecedented.  Now… what does this mean?  The 1970-1971 season had a moderate to strong La Nina.   It had a really good November and December rainfall combination here in Southern California.   A stronger La Nina, even a Super La Nina, which has never been seen before will put a wrench in any analog forecast.   We could see 8 inches, 12 inches, 14 inches, etc… The margin for a strong 1999-2000 season is around 12 inches of rain in Los Angeles, where I officially measure.

However, this is now projected to be a Super La Nina by numbers.  During the 2015-2016 Super El Nino, the public expected much more rain than what was received.  It acted more like a La Nina.  So, Newton’s Law states, “For every action, there is an opposite and equal reaction”, in-which the case would be me now having to look into an El Nino analog such as 1991-1992, which did have over 20″ of rain in Los Angeles.  The 1991 October is acting very similar to this one.  It started off slow and gained steam.  But, we have never seen a Super La Nina just like we never saw a Super El Nino.  If it behaves like a La Nina should, the 2006-2007 season with only 3 inches of rain in Los Angeles would come back to haunt us.  October 2006 is acting very similar to this month but it was colder than average, this month has been hotter.

Yes, it is confusing I know. I usually release the final numbers around this time. But, we never have seen a Super La Nina. We saw Super El Nino in 2015-2016 and it was dry. It’s possible a Super La Nina would be opposite given Newton’s law comes to mind that for every action there is an opposite and equal reaction, something I go by a lot in life, including my own forecasts.
The best analog I see with this is not a La Nina year, but acting more of an El Nino year, one of 1991-1992’s season. Started off slow but really hit hard as El Nino season do hit the hardest between December – March – La Nina tends to hit harder in the Fall. November will tell me exactly what kind of season we will have so I have to put off the final numbers till around mid-month.
The article narrowed down three possible analogs and explained each … the closest was not a La Nina season so that is what I am focusing on. Long range forecasters go with La Nina and El Nino … but I tend to wonder if patterns in September and October can tell the next 6 months due to the position of the main ridge and arctic jet once established. I’ve seen it many times before.

So let’s break this down by analog.

The common thing happening with the October 1991 is hotter/drier here with cutoffs.  It also was very cold in the Upper Midwest like Minnesota while 1999 was not as much.  It also had ridging over the Southeastern United States that blocked a lot of the freezing temperatures, keeping it north of there.  1999 did not.  So I’m dealing with a Super La Nina where October 2020 is acting like the Strong El Nino season of 1991.  And in 2015 I dealt with a Super El Nino that turned out into a La Nina drier acting year.

So in conclusion, the thing to best do for me is see halfway into November and see where we stand.  IF this is acting like a Strong El Nino, the flooding season will be between December and March, with a lot of rainfall all at once.  Projections from every single source alive is going with a much below average season, talking under 7″ of rainfall … but a Super La Nina has never been seen before and must not be ignored to study.