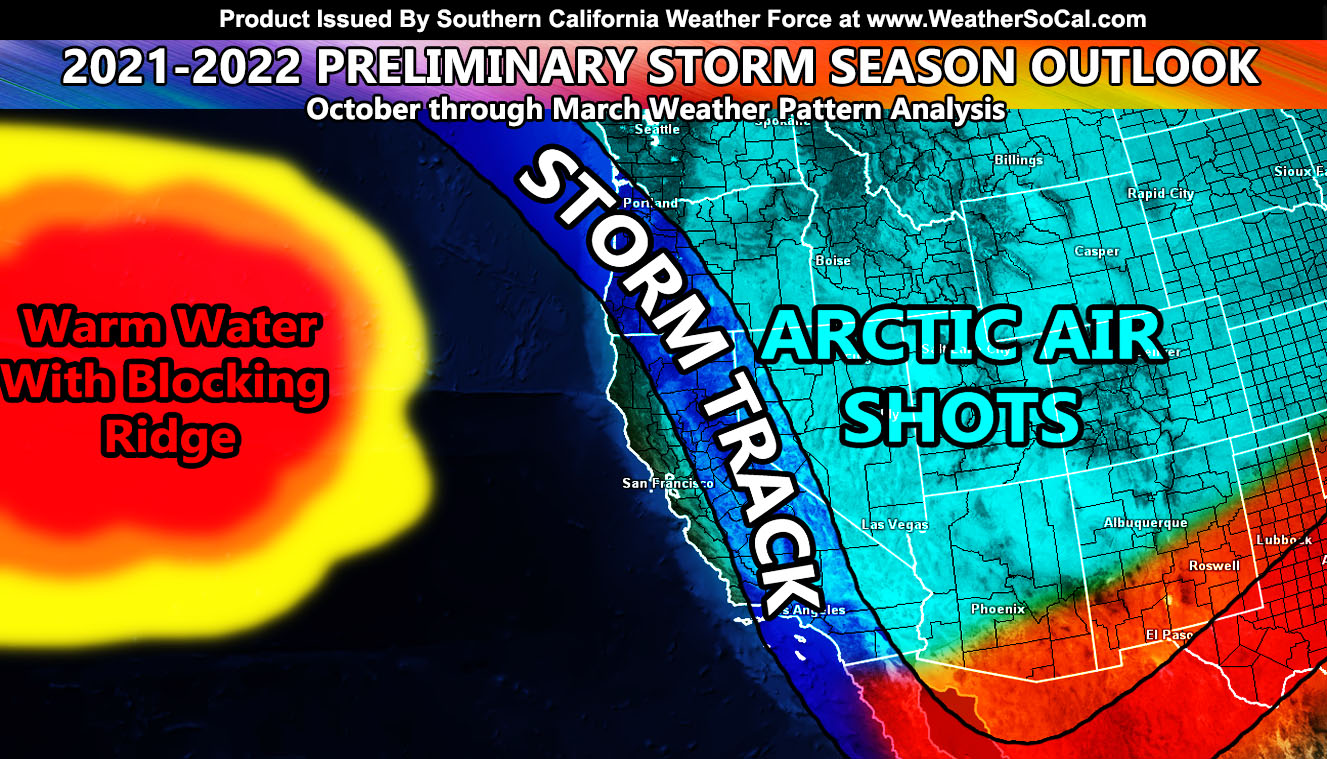 La Nada, which means neither El Nino or La Nina is what is known in weather as a toss-up year.  We have seen years go above normal in precipitation with it and have seen years fall flat on their faces with an extended drought.  My preliminary forecast is that we will likely see a stronger start for the first half of it, so between September, October, November, and December, followed by drier periods in the heart of what is usually the Southern California rainy season of January through March.  My Fall 2021 forecast for above average looks to be right, but I did not dare touch the winter seasons when making that.  There have been times when we have what I call a ‘false’ season start where we think because the Fall is good that the winter will be equally as good, which does not seem like it would be the case this year should the atmosphere continue to follow the course of time it is doing now.

Key components are developing right now.  Water temperature are up about 1000 miles west of Oregon.  This warm water creates a strong surface ridge in the area, and it often does make storms go up and over an upper ridge and then down across the forecast area and then out to the rest of the United States.  In order for us to have stronger storms, we would need to erode that warm water spot that has been known to put us further into drought.  This spot has been growing for quite some time now.  My studies indicate, with my own hypothesis, that this might be due to the garbage thrown out there.  We have garbage islands out there and the plastic may just be enough to use the Sun and heat up the water (like a magnifying glass) and bring about that warm area 1000 miles west of Oregon.  I have no proof, but if that is where the garbage is released within those ocean currents, then that would make some bit of sense because looking back 30 years ago we did not have such a warm spot in that area.

SANTA ANA WINDS:  These are going to be extremely powerful this year.  With the warm area in the water 1000 miles west of Oregon, storms diving north and east of the forecast zone would be extremely cold.  Cold air advecting from the Great Basin would most certainly cause some record breaking wind speed events in the forecast area starting in November.

LOW ELEVATION SNOW:  Give the flow north to south flow, if a system is caught, it would dive down and cause low elevation snowfall for our metro areas.  No one can say where until the systems are seen, but the pattern suggests the chance is more likely than not this season.

HIGH DESERT:  You are going to have one heck of a dry season sorry to say.  north to south flow is good for some low elevation snowfall, but without the strong tropical jet stream we normally see in an El Nino, I cannot get the storms to bring a healthy southerly flow for widespread rainfall up there.

FIRE SEASON:  Extremely dangerous.  The current drought looks to get even worse, and with the powerful Santa Ana Winds I expect, the season is going to be a very high risk season.  If in a fire zone, clear the brush now and make sure you have all your plans in place.  Edison shuts the power off during strong Santa Ana Wind Events for fire risk zones so if you are in one of those zones, get a generator.