February and March 2016 Forecast; The Start Of El Nino Effects For Southern California 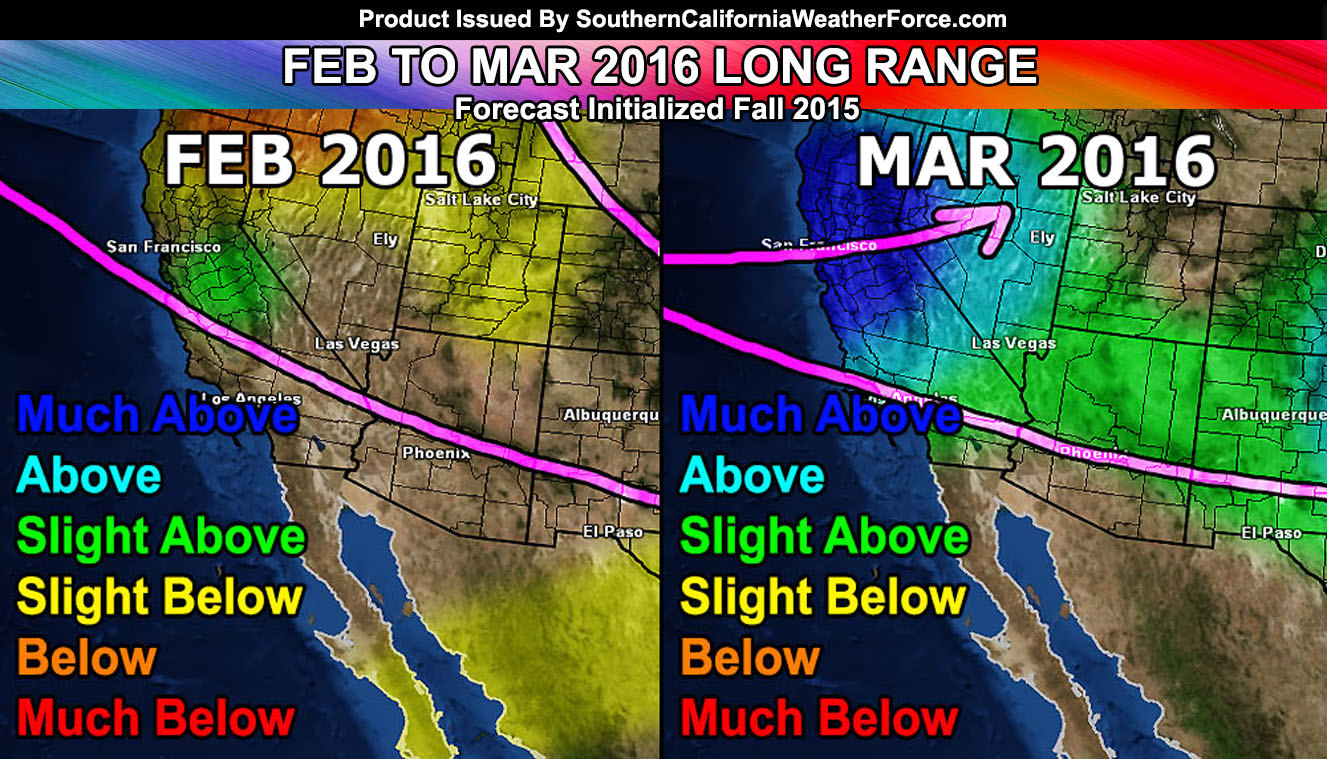 Clearly people are asking where is El Nino?  El Nino is here, however the effects have been pretty dull in terms of back to back systems … and lulls in the pattern.  That will change during the second half of February right on into March as my long range forecast does indicate the pattern and El Nino values moving into acceptable positions for powerful storms into Southern California.  If you are a regular here at the Southern California Weather Force you have seen my monthly forecast breakdown and January has been nailed, February has average precip, and March way above average.  We are just getting started so read on for those details.

If you are new here at the Southern California Weather Force, during the Fall of 2015 I released my monthly breakdown forecast and this showed January 2016 with above average, with a break through most of February, and March having a deluge with well above average precipitation.
Click Here To See Article and Video

The Martin El Nino Anomaly was named after my work since I worked on how it affected our seasonal pattern this year.  That anomaly is a surface ridge just west of us and this is pushing the storms up to Northern CA and the Pacific Northwest, leaving us with no back to back storms.  This is due to the incredibly high values of El Nino.  As stated in previous updates, the record values of El Nino would NOT mean more storms, but too much of a good thing could develop that surface ridge west of us and sustain it.  Those values have to drop in order to break that surface ridge down and this will happen through February and March.
Click Here To Read About The Martin El Nino Anomaly.

El Nino values below 2.4c is what we need and we remain at 2.5c – According to my research, the values need to drop below 2.4c and remain above a 1.5c to keep El Nino storm effects in the area.  This should happen soon and we are now at the cusp of it … dropping sometime this month and through March.

The first half of February 2016 will feature multiple offshore Santa Ana Wind Events … These wind events would also bring above normal temperatures to the region … and dry weather.  My probability map shows ZERO rain from tomorrow over the next 10 day period.  This is common with Santa Ana Wind Patterns.  The pattern after February 15th and 20th will breakdown again and with the falling El Nino values into acceptable areas … we will return to the storm period before the month is over.  February is usually the month with the most rainfall in Southern California and January 2016 was above normal due to the last storm we had.  February is going to have average precipitation and that means that we should meet the average rainfall for the month.

My seasonal forecast monthly for March showed the jet stream returning to Southern California with above average precipitation and this should be an interesting month for storms.

Due to the values dropping, this El Nino will extend through Spring, and quite honestly March 1st onward could be the El Nino effects everyone has been waiting for as the jet stream starts to change from winter lock to spring erratic.

Because the values are within acceptable range for Spring 2016 … combining this and sun angle could bring us multiple storm systems with the power to produce severe thunderstorms and tornadoes … some of which could make a run for Category Six … a storm only seen every five or ten years on the scale of damage here at SCWF.

So hang in there … if you want more storms then this El Nino is just going to get started … and if I’m right … It’ll get very active starting the last half of the month, toward the end … and into March.