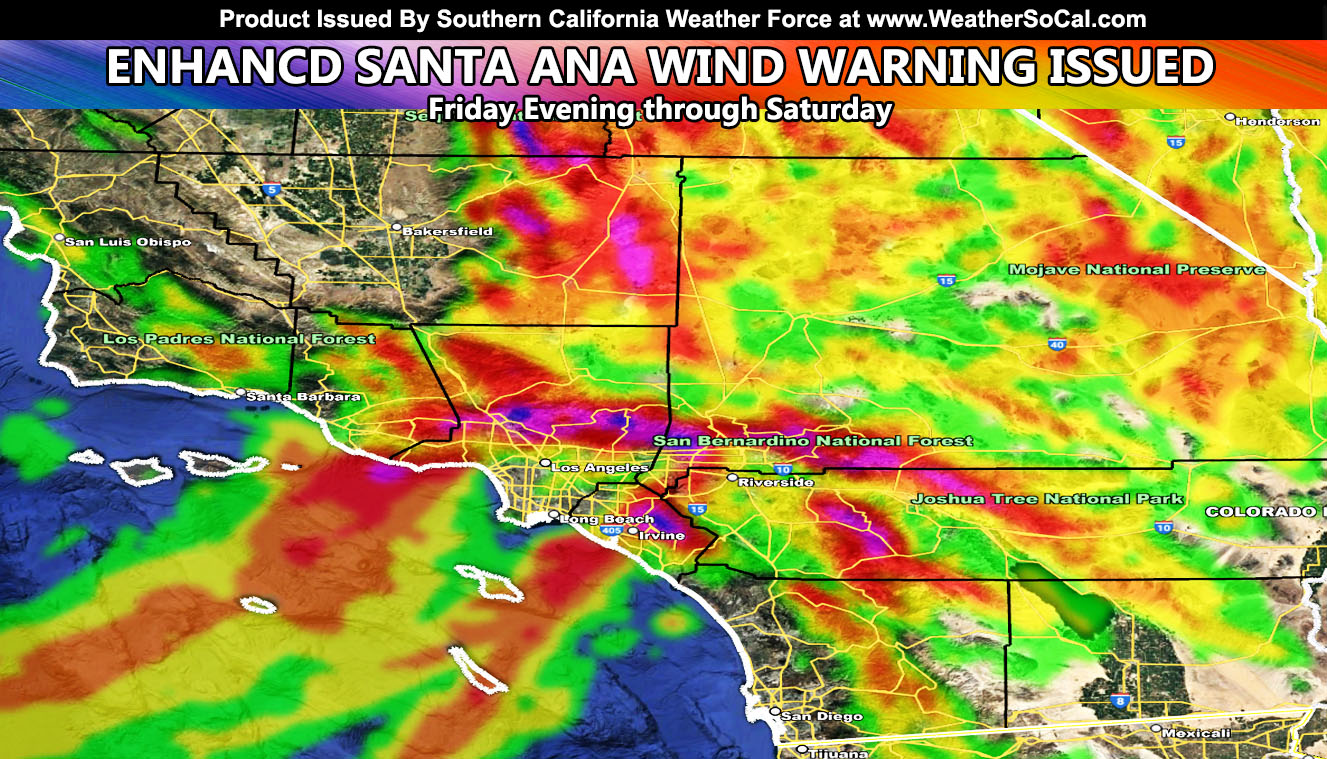 Wind gusts are being noted across the Sacramento and San Francisco Bay area as of this write-up this morning.  This shows where the main pressure wave is, which it is now heading down into the area.  Gusts across Bishop are also in progress and Las Vegas should start up any hour now.  The main pressure wave from the dry surface front will enter the passes this afternoon around noon or just before.  This is when reports below the passes and canyons will start coming in.

This evening however, the upper support finally starts to arrive and the increase in these winds will happen.  It will not be until tomorrow (Saturday) that the upper support switches from north to north-northeast.  With surface to 30,000 FT winds all moving the same direction, (offshore) this will produce the strongest Santa Ana Wind Event of the season.  The SCWF wind models (below) paint the grim picture of what is to come and you’ve had a long time to prepare if you’ve followed the previous forecasts for this event.

As I stated before, the area that will not see them is San Diego’s coast and valley areas.  Hey there’s even some level 3 activity showing up on the SCWF wind model for Santa Barbara so even you will get gusty north winds, but not damaging.

The final forecast you are reading now does have some changes.  This would be the Inland Empire along I-15 from Ontario to Corona where the previous forecast had level 3-4 winds and the final now had 5-6, so that is a big change, actually something I was expecting given I didn’t believe those areas would be on the lower side, not with this pattern.

The wrap-around moisture out of Arizona will bring snow showers to the mountains, namely the north and east end of the Los Angeles, San Bernardino, Riverside, and even San Diego County Mountains.  The dry air in place will put the snow-level below 4,000 FT.  That does not mean the top of the Cajon Pass will see it.  While you may see flurries in Phelan, the top of the pass has no lifting source south of there to warrant snowfall.  Big Bear however will, and this is where the heaviest snow will fall.  This, plus gusty winds, will put blowing snow in that area for your Saturday, starting easily later this evening … thus the Southern California Weather Force Blowing Snow Advisory was officially issued as snow ratios look high and any snow would pile up as powder …

Furthermore, light snow is possible as far west as Wrightwood, as far south as Anza to the higher San Diego Mountain locations on your Saturday …

Long Range:  Something is throwing a wrench into the long range system.  Whether it was the volcano’s gravity waves that were seen across the planet or something else, I stated before I could not issue a long range advisory due to uncertainty and distrust in the numbers I was seeing.  I will continue to monitor it, but I know many are wondering about the first AND last week of February surrounding your NASCAR fun.  Holding off on storm patterns this long means it should start to crack soon so continue to monitor the forecasts here at Southern California Weather Force

FROM PREVIOUS ARTICLE (TIPS DURING THIS EVENT)

SCWF wind models do show damaging wind gusts in the metros areas.  Even wind tunnels reaching as far as Compton so this means the San Gabriel Valley will have the winds as well when normally you do not.  Upper support gives what is called a mountain rotor (wave).  Mountain waves are like horizontal tornadoes just to the south of the mountains with a north wind like this.  This slams air downward, a reason the areas near the Southern Los Angeles and San Bernardino Mountains will see the strongest winds.  The strongest metro winds will be Chaffey College, in Ranch Cucamonga, where level 8 out of 8 is being detected on the SCWF wind model during this event.

The Cajon Pass will have wind gusts strong enough to tip high profile vehicles up.  If you feel you need to travel up there in a high profile vehicle take the 215 because I-15 from I-10 to the bottom of the pass will tip you over, no escaping that one.  But, if you take the 215 from the 60 you will escape the strongest winds until the bottom of the Cajon Pass where the game will be over.  This wind event is what I call a complete no way out zone.  I-5 through the Santa Clarita Valley will be too dangerous to travel in a high profile vehicle, same with the Cajon and even Banning Pass.  All freeways leading out of the Los Angeles Metro zones will have winds strong enough to tip you over.  High profile is for truckers and/or campers.  If you want to beat the winds, beat them before 3pm on Friday or you are stuck and I would not recommend going up the passes then.

The airport that will be DIRECTLY affected will be the Ontario International Airport.  I do not expect LAX ground to be affected, but low-level winds around the airport may make for a bumpy ride into it.  If you are traveling to Ontario International Airport Friday evening into Saturday you need to be very aware that the airport lies at the center of the wind tunnel this time.  The arrival traffic pattern usually reverses out of the west, but as per the SCWF wind model, the west arrival pattern is also blocked with extremely strong winds so only the most experienced pilots will be able to land the planes then.  You very well may be diverted to Las Vegas or Phoenix until the event passes.  Planes usually do not divert to Los Angeles due to traffic and airline space, so Phoenix or Las Vegas is where your plane would divert.

Mariners need to be extremely cautious when going to and from Catalina Island and the Channel Islands through offshore Malibu.  I know many instances where someone takes off in a sailboat from Ventura where the wind is a bit calmer and then capsizes when traveling southeast from there offshore Point Mugu or Malibu.  The SCWF wind model clearly shows this is not a good idea and I would recommend not going out Friday evening through Saturday.  Sunday is fine, Saturday is not.

If in the stronger level 6 conditions, do not park your car near trees.  People have died when Santa Ana Winds have brought trees down on them in their own cars.

These winds are not for everyone, namely the San Diego Metro areas, where north winds do not affect you, but does affect your foothill/mountain zones …

he following articles pertained to the forewarning of this event;

I control 10 counties in Southern California so there is a lot to say for various areas. The best I can do is let the images below speak for themselves.

The maps below are of flood, rain, snow, snow-level, or wind intensity, whichever is available now.  Each one is clickable.  Map 1 is NW SoCal, Map 2 is SW SoCal, Map 3 is SE SoCal, Map 4 is NE SoCal, Map 5 is the Cajon Pass, and Map 6 is the SCV region, which includes Gorman at the top.

GET TO KNOW YOUR MAP BECAUSE THESE NEVER CHANGE LOCATIONS 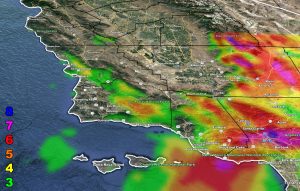 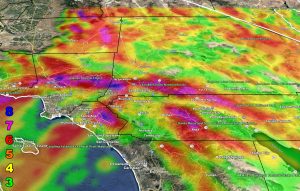 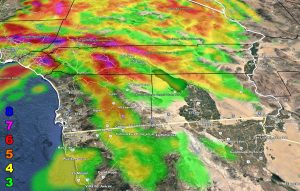 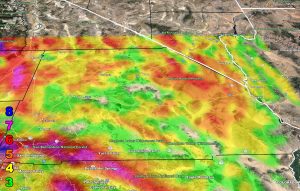 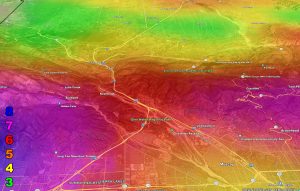 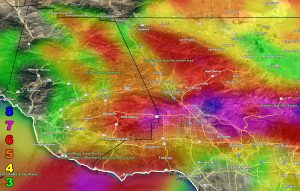