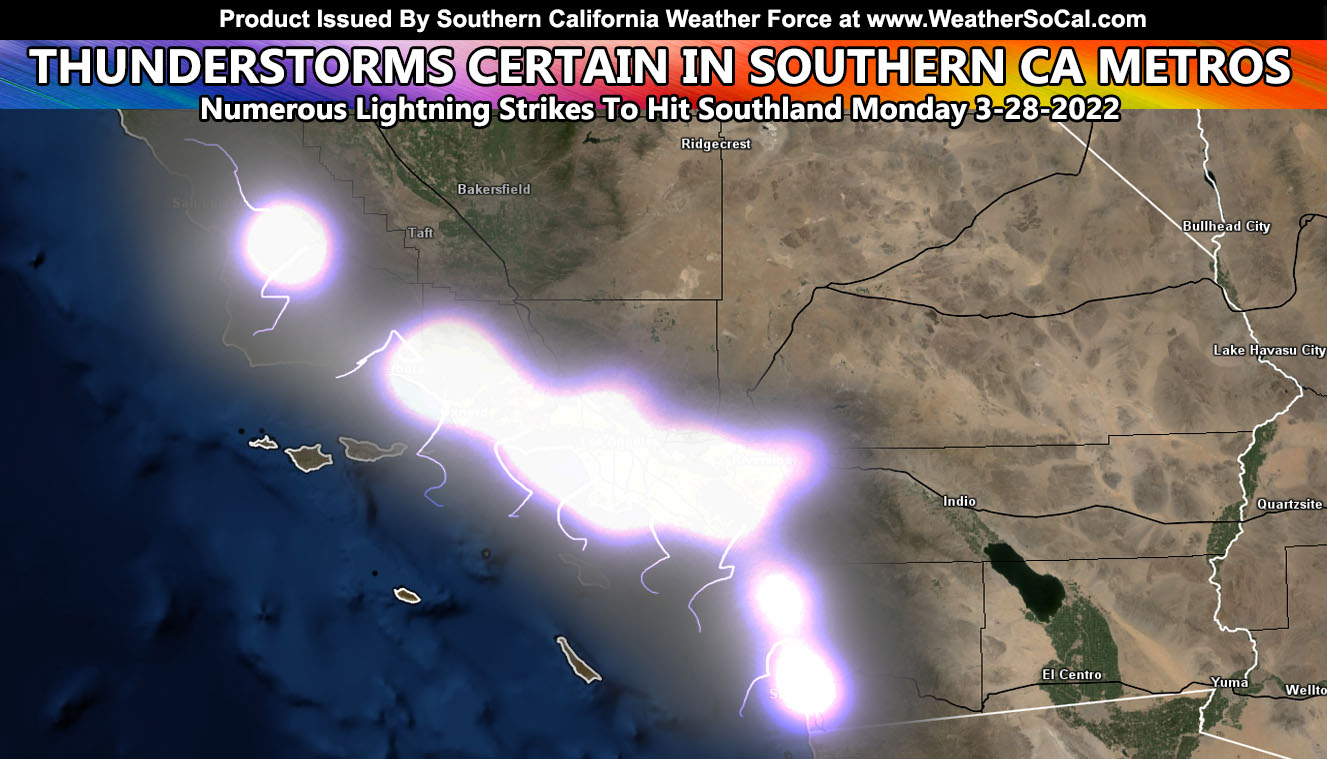 Southern California Weather Force has issued a Flood Watch for a Major Storm System expected to hit the forecast area on Monday, which includes thunderstorms, hail, waterspouts, and maybe even small tornadoes as it crosses the Martin Storm Diamond so read on for details and see if your area will be affected …

Yesterday I wrote the second outlook for this coming storm system and placed the thunderstorm wording in for Monday.  This is a direct follow up to that, including the Flood Watch issued over the e-mail alert system this morning.  You can Click Here for that watch or you can see the commanding links below on how this forecast evolved thus far, which is standard in all SCWF Forecast articles to show the people things were predicted, nothing will be a surprise, and it always is possible here.

Rates within this will also be on the higher side where thunderstorms cross.  Both the first and second fronts have the power to produce thunderstorms, including waterspouts to small tornadoes along and near the coast.

Flood Watches are issued here at Southern California Weather Force when conditions will be favorable for rain that is falling at rates that can produce flooding, with flash flooding in some of the recent burn areas and if you are in one of those areas … it tells you to get sandbags to protect your property and selves.

San Diego, you are not in the SCWF Flood Watch due to this being a classic southerly flow event for the areas mentioned above, but you still will see periods of heavy rain and thunderstorms mixed in on Monday as this system has taken a negative tilt, which is excellent for thunderstorm activity anywhere south and west of the main mountain ranges.

All who are flying out Monday should monitor for delays as these thunderstorms can and will probably cause some.

Winds:  Winds will be the strongest in the Vandenberg/SLO areas out of the southeast, starting as early as Sunday later afternoon into the night as the front approaches.  These winds will weaken some as the front moves east toward the VT/LA/OC/SD/IE areas because the upper-level and mid-level jet are tilted, not aligned for a stronger wind event along the immediate front.

As this event gets closer, upgraded watches will be issued.  We could even see some type of severe thunderstorm watch from this office should instability values continue on their track for larger hail, especially in the Los Angeles area.

LONG RANGE:  After this, we do not look to be done yet.  The active jet stream looks to be in place for yet another system around April 5th.  Strength and track unknown at the moment, but values indicate a system moving into the state then.

March 18, 2022 – The initial prediction for the date in the long range section
FINAL FORECAST: Cold Inside Slider To Move Through Southern California This Weekend; Rain, Snow, Wind Models; Hit and Miss Expected